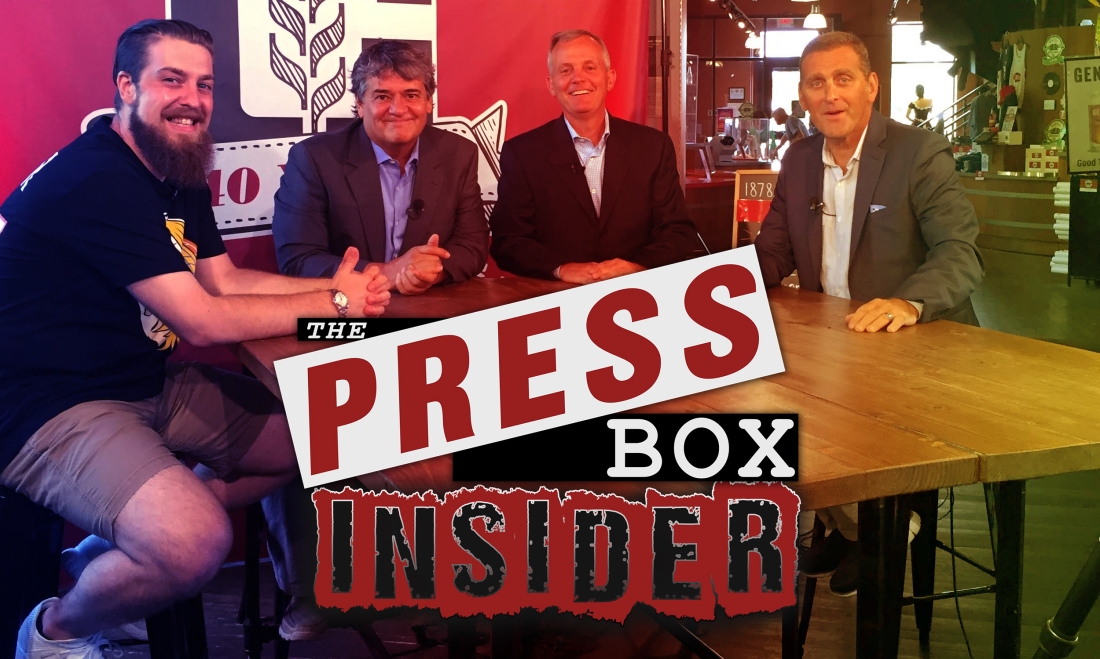 This was a special episode for all of us – first, it’s always great to be on location at the Brew House.  They have been gracious hosts, and were able to accommodate our shooting schedule for this week – which brings us to point 2 – the return of ‘Tools’.

In January of 2016, John DiTullio moved from afternoons on FOX Sports 1280 to his current role, as co-host of ‘DiTullio and Moran’ – which is broadcast from 11am to 2pm weekdays.  It was a great career move for John, but it unfortunately prevented him from appearing at our weekly 12:30pm taping of the Press Box.

So, in the spirit of celebrating 300 episodes, we were able to change our schedule for this week – and even make time for a trip down memory lane.

On to the show… We begin with the Ohio State/Urban Meyer controversy.  Meyer, who was placed on administrative leave while the school conducts an investigation, has a 73 – 8 record as coach of the Buckeyes.  Ignoring domestic abuse allegations may end his career at Ohio State.

Next up, we talked the Bills signing of Corey Coleman.  There was a lot of talk about HBO’s Hard Knocks (watch now on Youtube) during the pre-show gathering, and some of it seeps into this conversation – a natural given Coleman’s presence on the Browns, and his rather poor showing on Hard Knocks.  Coleman may be relieved to get away from the cameras  -unless ‘Bills Embedded’ turns out to be as much like Hard Knocks as it looks…

Like it or Not kicks off with Johnny Manziel… Bill clearly wonders if he has a future after his dismal CFL debut – but Duffy, a known CFL fan, is a believer in Johnny Football.  Expect a CFL jersey to appear on a future Press Box installment…

John gets to answer the next ‘Like it or Not’, regarding Carmelo Anthony joining the Houston Rockets.  Tools doesn’t like it.  He doesn’t like Melo.  And doesn’t hold back.  The conversation turns to Carmelo’s status for the Hall of Fame.  All seem to agree that he’ll make the hall, and basketball-reference.com pegs him at 98.2% probable. That site also shows his career salary earnings as over 232 million.

As often happens, we ran short on time for the segment, and a 3rd topic was dropped.  Here it is for you to debate – ‘Like it or Not’, NBA players voicing their support for LeBron James after President Trump’s tweet.  I guess the question boils down to how you feel about the mingling of sports & politics.  A topic that will surely return to the Press Box.

Pat Duffy begins the Unfinished Business’ portion of the show talking about Stan Mikita.  A hockey legend who passed away on August 7, Stan was named one of the 100 greatest NHL players in 2017.  He also may be remembered for a donut shop in Wayne’s World.  Pat sees another way that his legacy lives on, and may cause a drastic change in the NFL.

John DiTullio is a huge Penn State supporter, and alumni.  After a rough stretch, including one of the worst scandals in NCAA history –  there was some hope for the Nittany Lions.  From a Rochester perspective, a lot of that hope rode on the strong arm of Aquinas QB Jake Zembiec.  One of the best that Section V has produced, Jake was a two-time NYS Gatorade Player of the Year.  On August 7, Jake announced his retirement from playing football due to injury.

Mike Catalana’s Unfinished Business revolves around Josh Allen.  The Bills aren’t likely to start Allen this year, with the more experienced combo of AJ McCarron and Nate Peterman expected to carry the load.  Mike sees the logic in letting Allen sit under the learning tree, and in ‘Trusting the Process”…

That’s the show… special thanks to John, Pat and Mike for being a part of the show.  A reminder to see the guys discuss the Press Box show and history, right here.