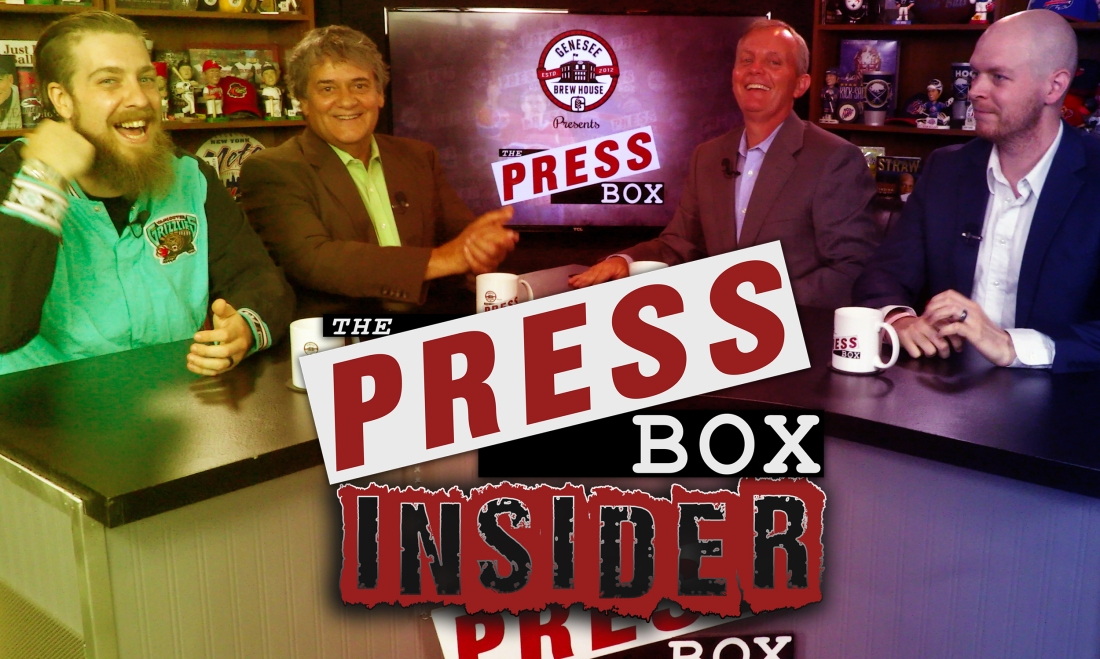 This episode is the landmark 300th show – technically 301 perhaps.  Originally, the plan called for the return of John Ditullio to the #PBOX, but scheduling didn’t come together as hoped.  John, along with Mike, served as the main panelists from episode 1 in 2012, until December 26, 2015 when ‘Tools’ on-air schedule prohibited him from making the Press Box taping (we tape every Wednesday at 12:30pm).  Plans, which may change, do call for John to appear as soon as logistically feasible.

The show begins this week discussing the bevy of trades at the MLB deadline.  A lot of times, before the taping begins, the ‘pre-show’ conversation can carry over into the on-air broadcast.  Luckily that didn’t happen this week, unless you are very interested in hearing Pat’s views on hand-washing after use of the facilities.  If you’d like more on that subject, call in to the Breakroom on WCMF.  Pat has opinions.  Dirty, unwashed opinions.

Next up, a discussion on the Bills Training Camp.  Mike and Pat are at camp on a daily basis, and able to provide some insight into the team.  Our own Rob Schulz attended camp recently as well.  For more Bills Camp coverage, be sure to follow Jenna Cottrell and Toby Motyka as well.  The 13 WHAM Sports team is knocking it out of the park again this year.

Like it or Not this week begins with Dan Moriarty, and wondering what happened to the Mets?  Dan has appeared on the Press Box many times since his 1st appearance in January 2013 (talking the hiring of Doug Marrone to coach the Bills, no less).

Next up, Pat Duffy tackles the issue of what the Dallas Mavericks are doing with their dance team – toning down the outfits.  Just a short time after a sensational cover story in Sports Illustrated exposed the sexual misconduct of the front office.  Also, Pat thinks we probably don’t really need cheerleaders in the NBA anymore.

Our 3rd Like it or Not topic involves the NBA and MGM Casinos deal.  We’ve covered the sports gambling issue many times in the 300 episodes of the show, and it’s interesting to see how much has changed, and how fast.  We went from worried NBA referee’s are on the take, to having a legitimate (and legal) sports betting world.

Unfinished Business is up next, and Pat kicks it off talking college basketball.  Rochester is about to have a team at Bryant & Stratton, and Duffy has BOBCATS fever!  He also wonders why RIT isn’t playing Division 1 hoops?

Dan is next, and he wants to talk Defense.  The Bills have been good on D, and he thinks that will be their saving grace until the offense catches up.

Mike, as is customary on the show, is the last to offer up an Unfinished Business.  This week, Mike is talking one of his favorite topics – the NFL – and one of his favorite theories – the imminent demise of the New England Patriots dynasty.  And, how does Malcolm Butler get blamed for it.

There it is, 300 episodes.  Thanks to Pat, Mike and Dan for participating this week.  And thanks to everyone who has appeared over the last 6 seasons.  There’s too many to name, but a few of them are represented in the following video.  It’s Bloopers, folks!