Chicagoland is set in Joliet, IL, and has been a staple of the Chase / Playoffs for the past few years.  It gets moved a bit north on the schedule this season, making room for a second Las Vegas date.  Interestingly, this track is similar in layout (but not in attendance) to The Diamond in the Desert; a 1.5-mile tri-oval, with 18 degrees in the turns vs. 20 out west.  As far as identity goes, it’s been all over the place on sponsorship. Ninja Turtles the past two years, AFibRisk websites before that, and now we’re off to Overton’s for this 400-miler.  Will this sponsor and this date stick?  We shall see. 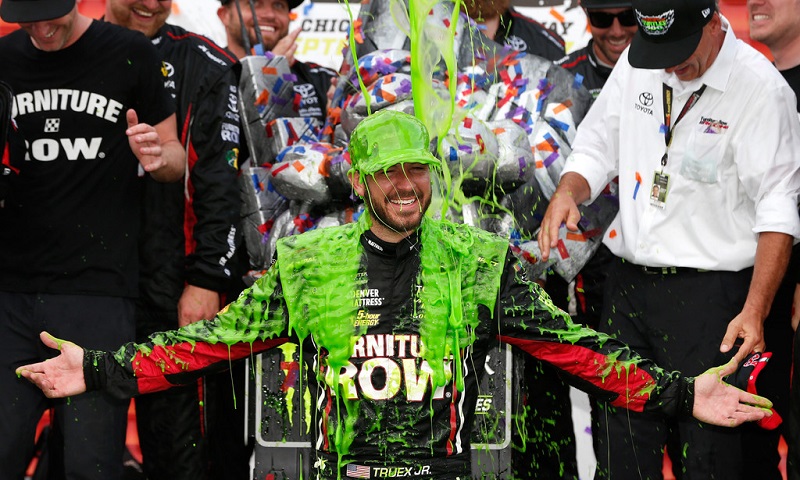 –Martin Truex Jr has found his swing, winner of two of the last three races.  He won this race last year, too, all good news for the Mayetta, NJ native.  He’s got three wins on the season, can he knock down a few more?

–Chase Elliott’s two starts here have left him with a 2.5 average finish, coming home 2nd in 2017.  He’s been runner-up far too many times than he cares to admit–  ..I won’t finish that thought.  Go get ’em, Chase!

Kyle Larson off to Chicago care of Cessna (Photo – @KyleLarsonRacin)

–Kyle Larson has three Top 10s in four attempts, and an 8.2 average finish.  Ryan Blaney is better on that number (7.5), very interested to see who does better of these two, head-to-head.

–Brad Keselowski carries a 9.2 average finish here, and two wins to boot.  We talk about this track being similar to Vegas, but it also shares close comparisons with Kentucky, a track we see in two weeks.  He’s got three wins there, and the success on each feeds the other.

–Kevin Harvick has two wins here (wayyy back in 2001 and 2002), and took home the Las Vegas race earlier this year, too.  He carries nine Top 5s in 17 runs, the most of any active driver.

JOLIET, IL – SEPTEMBER 17: Kyle Busch, driver of the #18 Skittles Sweet Heat Toyota, leads the field to the green flag during the Monster Energy NASCAR Cup Series Tales of the Turtles 400 at Chicagoland Speedway on September 17, 2017 in Joliet, Illinois. (Photo by Jeff Zelevansky/Getty Images)

Coverage of the race starts on NBCSN at 2:30pm on Sunday, green flag scheduled for 2:46pm.