The Monster Energy NASCAR Cup Series schedule has a way of mixing things up.  While there are stretches of intermediate tracks, and a pocket of short tracks here and there, we go from the wide open pack racing of Talladega last week to the high banks of Dover International Speedway.  Appropriately described as “a concrete cereal bowl,” it has a “self-cleaning surface” where any car that ends up in an outside wall will sink to the bottom of the track.  It is one of the most demanding races on the schedule, always testing endurance of man and machine.  There are longer races, there are some with more twists and turns, but none may match the combination that “The Monster Mile” serves up.

Kyle Larson, driver of the No. 42 DC Solar Chevrolet, poses with the pole award after winning the pole during qualifying for the Monster Energy NASCAR Cup Series AAA 400 at Dover International Speedway on Friday. (Photo Credit: Brian Lawdermilk | Getty Images)

–Kyle Larson was fastest on Friday, starting out front at a track where clean air is so important.  Traditionally this is a race where if you want to finish in the Top 10, you’ll probably want to start there, too (though 2017 had something to say about that).  It is Larson’s first pole of the season, and he’s smiling because he remembers finishing 2nd last year (and 5th in the Fall), and how he can turn that into a 1st this year.  Oh, and he’s got a 7.9 average finish and 6 Top 10s in 8 starts, too.

Kevin Harvick, driver of the No. 4 Jimmy John’s Ford, gets into his car during practice for the Monster Energy NASCAR Cup Series AAA 400 at Dover International Speedway. (Photo Credit: Brian Lawdermilk | Getty Images)

–Kevin Harvick starts alongside the #42, his third front row start here since 2014.  It’s not his best track, just a 14.9 average, but he hasn’t failed to finish a race since an engine expired on him in 2006.  That is his lone DNF, coupled with one career win which came in the Fall of 2015.  Harvick has been red hot this year, look for him to be up front most of the day, if not its entirety. 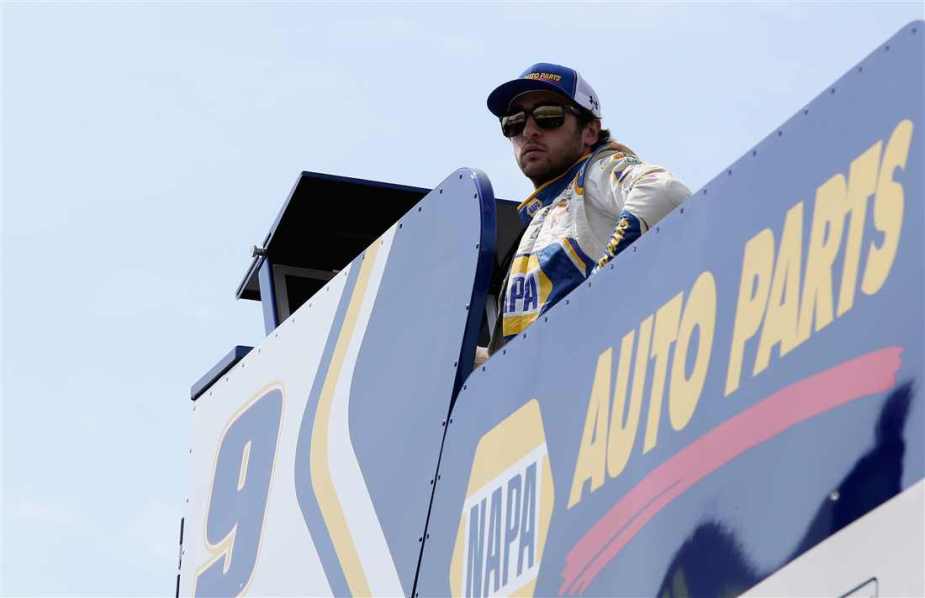 –Chase Elliott has finally started to get things brewing: 2nd at Richmond, 3rd at Talladega last week, and now we’re onto Dover.  It is his 2nd best track by average finish with a 3.2, he has 4 Top 5s in 4 starts.  He qualified 6th on Sunday, his best start yet.  Could it mean..dare we suggest it?  ..Good luck out there, Chase!

–Jimmie Johnson’s most recent win came at this race last year.  To be fair, it hasn’t been a full calendar cycle just yet (the 2017 AAA 400 Drive for Autism ran on Jun 4th, 2017), but the drought remains.  In NASCAR, a winless streak hangs over your head like the darkest of clouds, keeping the sun off your shoulders and looming heavy each and every weekend.  The questions of “when are you going to win again?” dig a little harder, and each failure to finish 1st hurts a little more.  Welp, Jimmie Johnson picked a great place to try to get off the schneid, one which he calls his favorite.  This guy has got 11 wins here — a track record — and since we’ve talked about it for everyone else so far: 9.1 average finish, and 23 Top 10s in 32 attempts.  This could be the week, though he’s got some work to do.  He’ll start 19th, but good news for Johnson, his 2nd win came from the 19th position.  Stay tuned, fans. 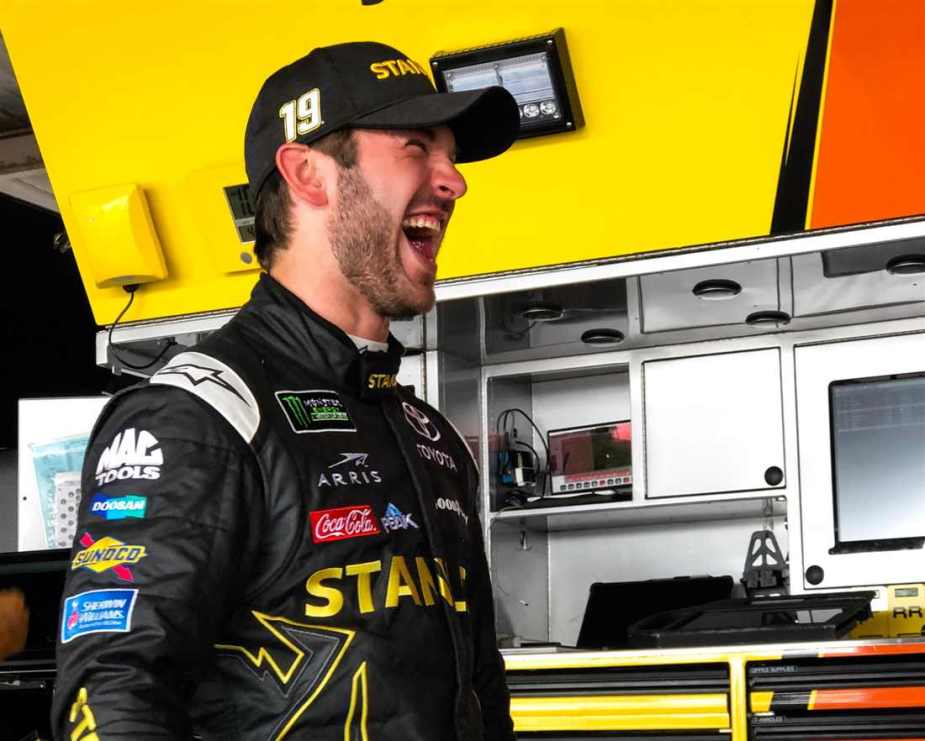 –Daniel Suarez has something to smile about this weekend (which he’s extrapolated to a great big laugh), returning to a track where he scored two Top 10s as a rookie in 2017 (and a 7.0 average finish).  He’s yet to see a double digit number in any column yet, turning a 3rd and 5th into a 6th and 8th.  He starts 7th on Sunday, and the pessimistic mathematician will suggest “he finishes three spots worse here than he starts, he’ll finish 10th.”  And that wouldn’t be a surprise, honestly, a 10th for his last two races at Richmond and Talladega, and an 11th before that at Bristol.  The optimistic logician says “consistency!  He’s got a hot streak going, and he’s only had Top 10s here.”  We’ll see how the 2018 version of Daniel Suarez handles the high banks of Dover that the 2017 version solved so well. 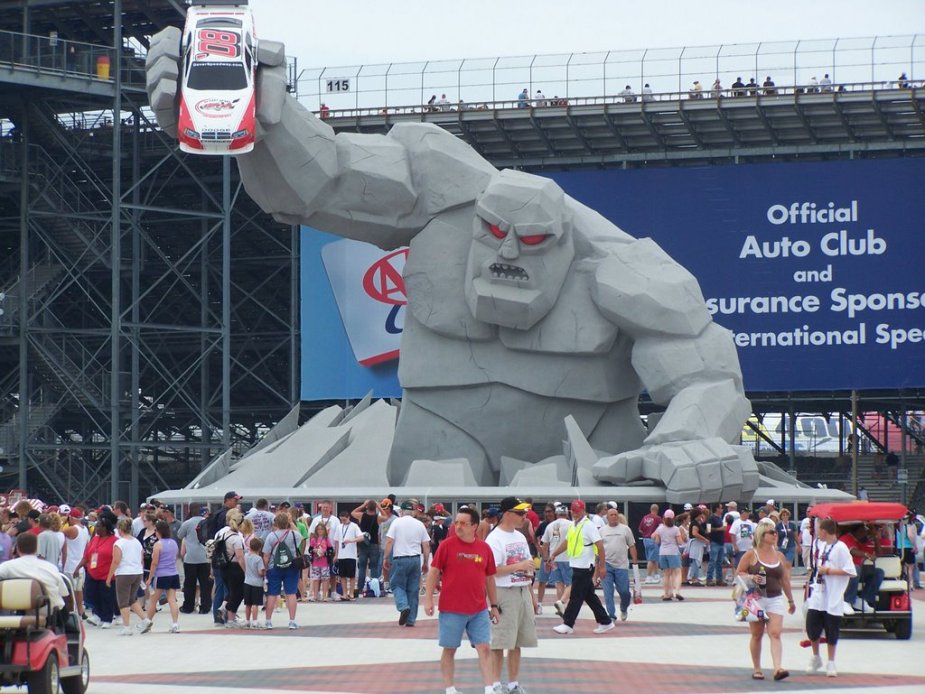 Miles the Monster greets fans and terrifies competitors all the same.

–Miles the Monster is the humongous mascot of Dover International Speedway, a 46-foot monument that sits outside the grandstands.  And yes, that is a regulation-size car he’s holding up there, a stark reminder to any driver that he’s firmly in the grip of The Monster Mile so long as the race is under way.  As pictured in the background of Jimmie Johnson’s Victory Lane photo, a miniature version of Miles is the key component of the trophy.  When one has the stamina, skill, fortune, what-have-you to avoid trouble all day, enough so to win the race, not only are you granted the trophy..but two cars in the your likeness are inserted in place of those shown above: one on the actual Miles monument (probably a backup car), and another 1:24 version on the trophy.  And that second one may not seem like a huge deal..but note that an artist has to be ready with a realistically detailed version of one of any of the thirty-eight drivers this weekend.  As with George Costanza and “Fitted Hat Day” on Seinfeld, “if somebody shows up with a pinhead, I gotta be ready for that!”  There are favorites at any NASCAR track, sure, but you never know, and that’s why they run the races (though, to be fair, there really haven’t been many “surprises” here since Jody Ridley’s only career victory way back in 1981).  Whatever the case, Miles will be watching.  Beware!