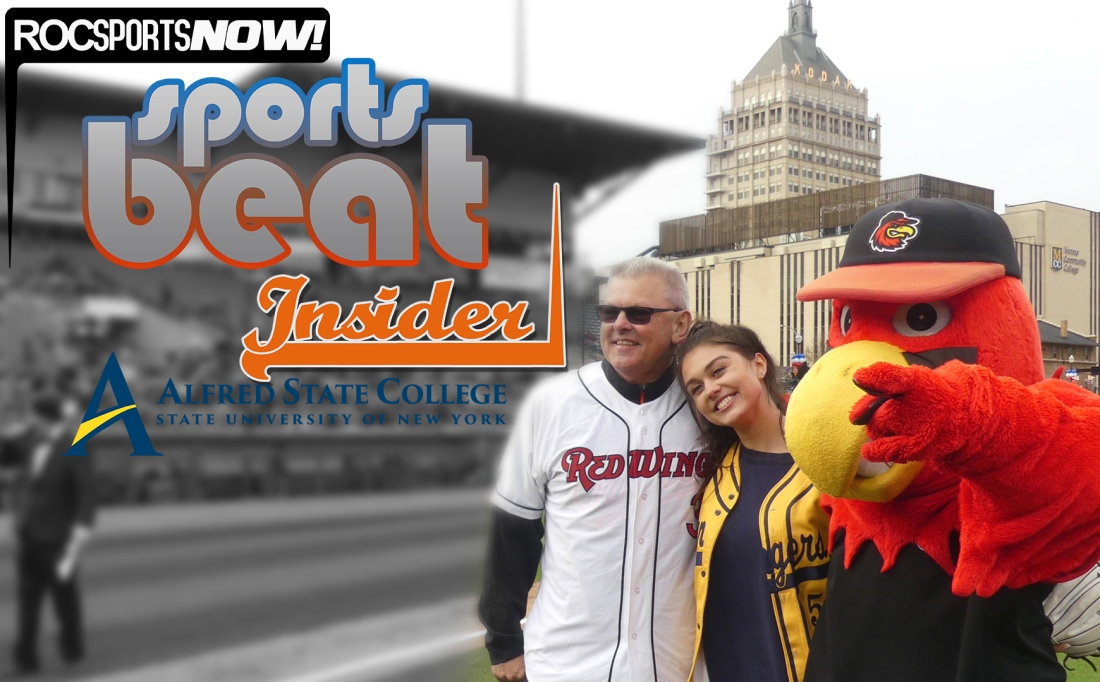 Now, here’s your behind the scenes look at the production, from the producer and the shows many contributors.  It’s week 35 of the Sports Beat season, and with the local colleges finishing up their school year, the high school season feels near an end.

We start this week in Victor, with the golf team led by Trevor Sousa.  The Blue Devils are seeking a sectional title, last won in 2017, and are led by Senior Jeremy Summerson.  A Rochester Golf Association Player of the Year, Summerson has brought his game to the next level, and will be heading to Towson State in the fall to continue his career.

The show this week was running long, so we present to you now the expanded “Director’s Cut” of  “A Complete Game”…

Paul Gotham from Pickin’ Splinters joins Dave Yates for the Dunkin High School Notebook.   Paul is talking Section V Baseball, and the talented duo of Casey Saucke (Greece Athena) and Trent Wasserman (Brighton).  Also, a special acknowledgment for four section V alums who have earned an opportunity at playing in the NFL.

Kyle O’Gara is up next with our Making the Grade nominee, Jazmine Breedy from World of Inquiry.  In our Section V Spotlight, we look at how some alums are doing at the college level, including Hilton’s superstar Yianni Diakomihalis and Victor’s TD Ierlan.

Our top story of the week is on Spencerport Softball.  You might recognize Alayna Berry…

Big league chew has a girl on their packaging! pic.twitter.com/Q9fwbb8W2q

That’s Alayna on the package of Big League Chew.  She’s a sophomore for Spencerport, and her grandfather is a Rochester Red Wings Hall of Famer – Bobby Bonner.  Also, we ran a “Look Back” story last week on the Rangers team from 2015, and the junior high sisters – the Brongos, Sydney and Maddy.  This week, we update you on how their doing, and the next Brongo to join the team, Lily.  There’s a lot to unpack this week in Spencerport… so let’s dig in!

Here’s a video of the #1stPitch from Frontier Field…

And that’s a wrap on week 35!  Be sure to check out the full episode– and tune in Every Saturday night on 13 WHAM after the late news, and on Sundays at Noon.

We leave you this week, with an Insider weekly feature – looking back at some of our stories from the past 7 years. From September 28, 2011 – it was our 1st episode ever, and we met James Marino of Spencerport Football.  James was on the sidelines at that time, having recently been diagnosed with leukemia.  At the end of that school year, James would be honored with the US Marine Corps Distinguished Male Athlete Award at the Spencerport School District awards banquet.