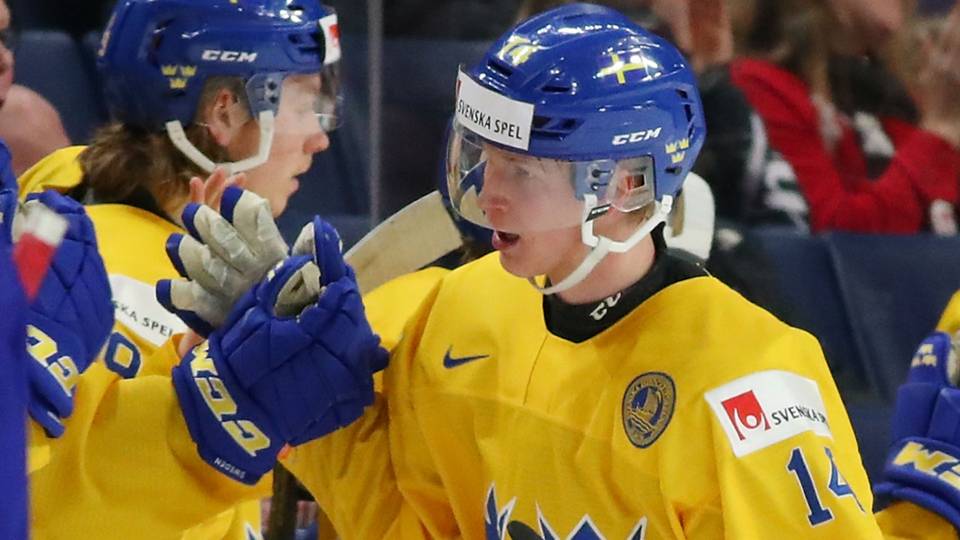 BUFFALO, N.Y. – Sweden scored three goals in just over a two minute span early in the third period on their way to a 4-2 win over the United States in the semi-final game of the World Junior Hockey Championships this evening.

Filip Gustasson stopped 29 of 31 shots for the Swedes, who will face Canada in the finals on Friday. The Canadians downed the Czech Republic 7-2 in the other semi-final.

Elias Pettersson of Sweden opened the scoring in the second period on a power play. His wrister from the left faceoff circle beat US goalie Joe Woll high on the glove side. Alexander Nylander, the Sabres first-round draft choice in 2016 and current Rochester Amerk, drew one of the assists.

The Americans almost tied it in the last minute of the second frame. Casey Mittelstat,  last year’s first-round pick of the Sabres, broke in a three-on-none rush but was foiled by Gustasson’s left pad save.

Sweden broke it open 2:13 into the third. Lias Anderrson scored on a nice two-on-one from Fredrik Karlstrom to make it 2-0.

The Swedes then scored twice on the same penalty-kill to gain a stranglehold on the contest. With Linus Lindstrom in the box, Oskar Steen found the net at 7:24 to make it 3-0. Just 38 seconds later, Axel Johnsson-Fjalley’s tally upped the lead to four.  Sabres’ prospect Marcus Davidson assisted on the latter, which was the third goal by Sweden in a 2:08 span.

The US finally got on the board with 7:35 left in the third. Kieffer Bellows blasted home a pass from Kailer Yamamoto on the power play to end the shutout bid of Gustavsson, who is Pittsburgh Penguin property.

The Americans pulled their goalie with 3:36 left in regulation; it paid off when Brady Tkachuk made it 4-2 from close in with 3:01 left.

However, despite a penalty to Sweden with about two minutes left, that was all for the scoring.

Sweden outshot the US 31-20 for the game. Woll was pulled from the US net in favor of Jake Oettinger after the fourth score, even though none of the shots he let in could be considered bad goals.

Although the number of tickets sold was not available, there appeared to be about 5,000 fans at KeyBank Center for the game.

The US will play the Czechs in the bronze-medal game tomorrow.

View all posts by jackgodzuk