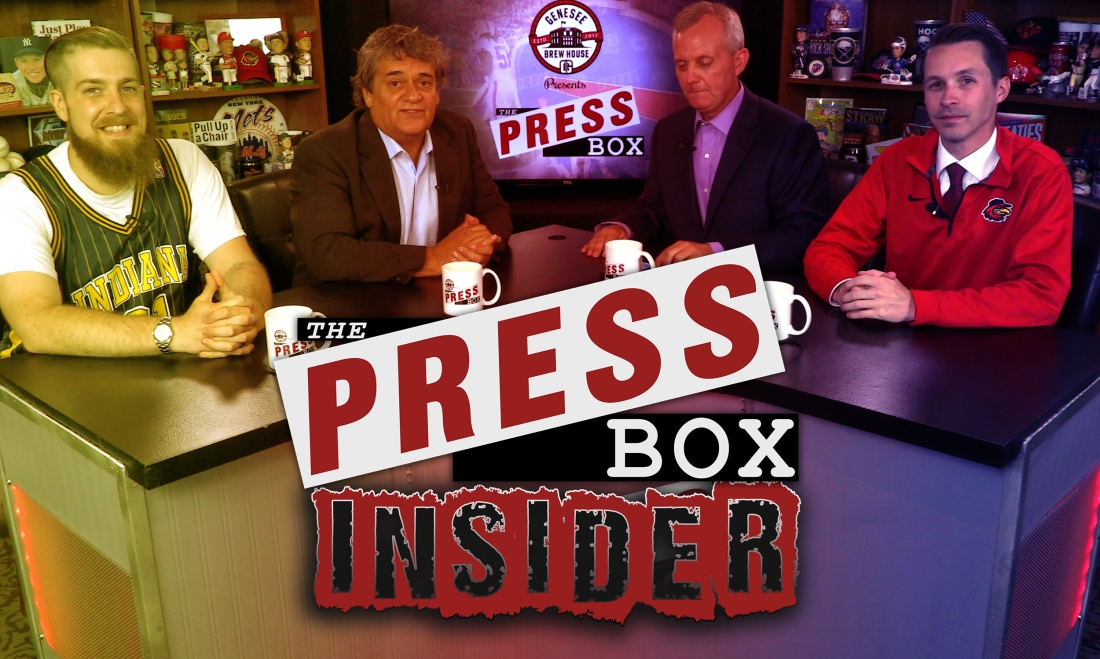 Nate has become a semi-regular guest on the show.  He brings great insight to the many baseball and Red Wings-related topics we cover, but he also knows his stuff on other topics.  He’s called local high school sports for Time-Warner/Spectrum, and he’s got this going for him…

The cap to a fantastic 2014 season with the #Royals. Hopefully the first of many! pic.twitter.com/0FjWct2dru

Bill Pucko has been eagerly awaiting Nate’s return to the show to discus the new “Extra Innings” rule being utilized this season in the minors.  For the uninitiated:

This is the first season of the minor league extra-inning rule in which a runner, who was the hitter in the order previous to the leadoff batter of the extra inning, is put on second base. – USA TODAY 5-30-2018

The reasons for the rule change ultimately come down to preserving arms.  The idea that it’s about pace of play, or making the game “more exciting” seems like ‘spin’, and not the Charlie Morton-type.

Buffalo Bills Training Camp has wrapped up at St. John Fisher College, and we take a look at the biggest question coming out of camp… Who is the starter at QB?  We’ve tackled this topic many times – and the thought was that maybe the matter would be settled by now.  It is not.  In fact, it may be more up in the air than before, since Rookie Josh Allen has looked good (Strong Arm?… uh, yeah!).

This is as good a time as any to remind everyone we tape the show on Wednesday afternoon, so this entire discussion comes without the knowledge of what happened in the Bills’ 2nd pre-season game vs the Browns on Friday.

The Like it or Not segment this week is devoted to Tiger Woods.  Over the course of almost 7 seasons, we have seen Tiger’s triumphs and his defeats… our panelists thought the days of Tiger Woods winning a major were a thing of the past.  Tiger himself, doubted his ability to compete.  Then he finished 6th at The Open. And last weekend, battled right down to the final back 9, finishing in 2nd place at the PGA Championship. Is Tiger back, and for how long?  The guys discus…

As usual, when the show is running long – and it was – there are cuts that need to be made.  Two other talking points for Like it or Not were dropped this week.   Bill was interested in getting everyone’s takes on the Oakland Athletics.  The A’s weren’t expected to do much this year – with a low payroll, a no-name starting rotation and the East Coast bias of baseball all factoring in.  But, here they are, in contention for the AL West.  Another dropped topic involved the ongoing Anthem protests (or better stated, protests during the National Anthem).  It’s a topic we’ve covered before, and one that will remain a topic to discus for another time.

Unfinished Business kicks off with Pat Duffy.  As many of you know, whether by listening to the Breakroom every morning on WCMF – or from that one clip on Youtube – Pat was once a stand-up comedian.  That mean Duffy can bring the funny.  Sometimes though, especially during Unfinished Business, Pat can be serious.  This is one of those times – talking about Maryland Coach DJ Durkin and Urban Meyer at Ohio State.

Next up, Nate Rowan looks at the American League Wild Card situation.  It looks like the Yankees are headed for a 1-game playoff, as the Boston Red Sox have a substantial lead.  Who might the Yanks play?  And how does their chances at advancing look?  Nate might say ‘Not Good’.  In fact, he does say that.

Mike Catalana closes the show this week talking about the recent comments made by the Jaguars Jalen Ramsey.  Josh Allen’s name entered the conversation, and Ramsey was pretty tough on the rookie.  In fairness, Ramsey had a lot to say about a lot of players in the NFL, so Allen is in good company in that regard.  Here’s Mike’s thoughts…

That’s the show for this week… big thanks to Mike, Pat and Nate for talking sports with us.